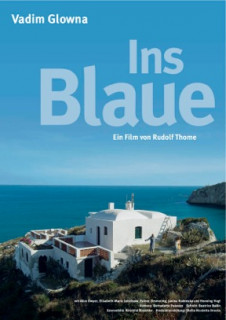 Into the Blue
written, produced and directed by Rudolf Thome
trailer

Rudolf Thome’s  “Into the Blue” is a tragicomedy on the making of a film, where a homage of sorts to the French New Wave and Godard (le mépris) can not only be sensed in its structure and storyline, but choice of locations too.

Retired filmmaker Abraham Rabenthal (Vadim Glowna in one of his last appearances) is producing the directorial début feature (titled: Ins Blaue) of his daughter Nike (Alice Dwyer). Together they are filming around Neapolitan locations with their cast and crew. Nike’s film is about three young women – Eva (Esther Zimmering), Josephine (Janina Rudenska), and Laura (Elisabeth-Marie Leistikow) – travelling in a camper van through Italy and having individual adventures with men along the way. Eva hooks up with a monk, Josephine with a mute fisherman, and Laura, an old philosopher. After a bank rejects Abraham’s application for further funding, costs needed to be cut, and two of the male characters – the monk and the fisherman, are played by the same cast member Paul (Henning Vogt), and the old philosopher, by Abraham himself.

Previous « » Next
We use cookies to ensure that we give you the best experience on our website. If you continue to use this site we will assume that you are happy with it.Ok